June 13, 2022 Vancouver, BC – Mundoro Capital Inc. (TSXV: MUN | OTCQB: MUNMF | www.mundoro.com) (“Mundoro” or the “Company“) “), is pleased to report an update on initial exploration at the Dos Cabezas Property in Cochise County, Arizona.  Vale is earning into the Dos Cabezas property based on a two year earn-in agreement that was signed in December 2021 (see press release here).

Teo Dechev, CEO and President commented: “We are pleased to announce the initial exploration completed at the Dos Cabezas property, which is a Mundoro generated copper-focused project in the Laramide Belt in Arizona, and under option to Vale as of December 2021.  Mundoro is the operator of the exploration program which has consisted of prospecting, geological mapping, geochemical grid sampling, alteration analysis and a geophysical survey. The exploration team is excited to drill test this new target area identified through multiparameter techniques indicating the potential for a porphyry system that has no record of any modern exploration or drill testing.”

The Dos Cabezas Project lies within the Laramide Porphyry Belt, a prolific region of porphyry copper deposits extending from northern Mexico through the southwestern US. The majority of production in Arizona is related to the Laramide Porphyry Belt which hosts world class deposits such as Morenci, Safford, Miami-Inspiration, Sierrita, Silver Bell, Resolution, and others. Arizona was responsible for 66% US production of copper in 2018.

During the Laramide Orogeny (~75-50ma), numerous porphyry copper deposits formed, making this region one of the most prolific producers of copper in the world.  Post laramide faulting, volcanism, and sedimentation concealed many of these systems, leaving many deposits to be discovered by today’s advanced methods of exploration. 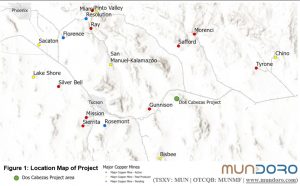 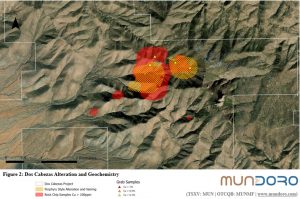 The Dos Cabezas Project is near the historic Teviston, Silver Camp, and Mascot mining districts. With the exception of the Spike E Hills porphyry system (located ~4 km northwest), historic mining and exploration focused on gold/silver/base metal veins and substantial amounts of high-grade copper ore shipped directly to smelters.  Although USGS mapping in the 1980s determined the existence of an attractive, large Laramide volcano-igneous complex in the western Dos Cabezas Mountains, lack of access precluded serious porphyry copper exploration throughout the late 1900s.

Numerous prospects, shafts, and adits are present within the Dos Cabezas Project Area. Mining reported from the late 1800s through to the late 1900s includes production from widespread placers, numerous high-grade gold/silver veins and substantial quantities of direct-shipping base metal ore from a few larger mines.

Primary targets identified by Mundoro’s initial exploration of a small portion of the project area include:

The geology of the property consists primarily of “Laramide aged” volcanic and intrusive rocks. These have been uncomfortably deposited on Cretaceous aged sedimentary rocks and Proterozoic aged metamorphic and granitic rocks. Intruding into the volcanic rocks are a number of granodiorite to monzonite intrusives with one published age date of 64.3ma. The volcanics are truncated to the south by a major west-northwest striking structure known as the Apache Pass Fault Zone. This structure places Cretaceous and Paleozoic sedimentary rocks and Proterozoic metamorphic and granitic rocks against the Laramide volcanics. “Basin and Range” style normal faults are inferred on published maps south of the Apache Pass Fault Zone with relatively shallow pediment cover occurring along the range front in contact with the Laramide volcanics.

The above technical disclosure in this press release has been reviewed and verified, by T. Dechev, P.Eng, PEO, APEGBC, the CEO of the Company, a Qualified Persons as defined by NI 43-101.

Mundoro is a publicly listed company on the TSX-V in Canada and OTCQB in the USA with a portfolio of mineral properties focused on primarily base metals.  To drive value for shareholders, Mundoro’s asset portfolio generates near-term cash payments to Mundoro from partners and creates royalties attached to each mineral property.  The portfolio of mineral properties is currently focused on predominately copper in two mineral districts: Western Tethyan Belt in Eastern Europe and the Laramide Belt in the southwest USA.