July 6, 2021 Vancouver, BC – Mundoro Capital Inc. (TSXV: MUN | OTCQB: MUNMF | www.mundoro.com) (“Mundoro” or the “Company“) a royalty generator company with a portfolio of projects focused on copper and gold that generate future royalties and near term cash payments, is pleased to report an update on the Vale-Mundoro Project exploration programs and the target compilation field work for the GT7 Copper Project in Serbia.

Teo Dechev, CEO and President commented: “The Vale funded exploration program in South Timok has been progressing nicely with drill testing having started at the Skorusa porphyry system, then moved on to the Padina target area and is expected to continue in the third quarter to Tilva Mare where geophysical modeling along with geological interpretation is refining drill targets. Elsewhere Mundoro has been advancing targeting at the GT7 copper project where field investigations are demonstrating a larger alteration footprint indicative of classic porphyry systems.  And at the same time, Mundoro has been actively working with the local governments to advance applications of new areas all in the effort to bring new mineral opportunities for stakeholders.”

●        Compelling Targets Advanced on Vale-Mundoro Projects: The Vale-Mundoro Technical Committee approved a US$1.9 million exploration program up to the end of Q3-2021. The six target areas were identified for further exploration based on preliminary results that identified the potential for porphyry copper-molybdenum-gold style deposits.

●        Mundoro Advances Target Compilation at GT7 Copper:  The project contains exposures of diorite porphyry copper-gold type quartz stockwork mineralization and is related to precious and base metals veins that extend in sedimentary country rocks. Historical data collection was completed and a field sampling and mapping program is underway.  The project is being marketed to interested parties.

As a result of these exploration programs, the preliminary results identified six areas prospective for porphyry copper-molybdenum-gold deposits for initial focus.

The 2021 exploratory drilling program with Vale at the Skorusa copper-gold porphyry system consisted of:

·       3 drill holes tested 3 geophysical targets to 600 m depth at the outer northern portion of the porphyry system that have not been previously tested. Drill core analysis suggests the elevated chargeability zones from a historical Induced Polarization (IP) survey are related to disseminated pyrite in the country rock environment.

·       3 drill holes tested 3 targets at the main and south-eastern portion of the porphyry system that remain partly tested (see Figure 2):

●        Drill hole 21-SKO-04 – tested down dip of the mineralized porphyry at the West Zone. Drill results obtained from this hole are:

●        Drill hole 21-SKO-05 – tested the geochemical soil anomaly at depth at the East Zone. Drill results obtained from this hole are:

Further structural analysis is planned to target mineralized clusters within Skorusa.  The area between the East Zone and West Zone is of interest for a potential feeder zone at depth.

At the Skorusa West Zone, three main porphyry phases have been identified: early, inter-mineral and late mineral. The early and inter-mineral phases display potassic alteration characterized by a biotite-magnetite assemblage. Intervals of early porphyry contain magnetite and chalcopyrite-bearing A and B-type quartz veinlet stockworks with potassic alteration. Current drill hole 21-SKO-04 exhibits well-developed zoned alteration downhole from phyllic to potassic at depth with increasing intensity of the quartz-sulfide veins and related copper and gold mineralisation when in potassic alteration (see Figure 3). Further drill testing is warranted for this target area.

At the Skorusa East Zone drill core analysis of recent drill hole 21-SKO-05 suggests intense reverse faulting in the area of drilling where repetition of alteration zones from propylitic to argillic and phyllic and back to propylitic alteration have been observed downhole. The faulted zone of argillic alteration from 294 m to 363 m contains a set of several base metal veins in thickness of tens of centimeters composed of anhydrite, galena, sphalerite, chalcopyrite and molybdenite. The orientation of the veins shows a strong north-south trend, dipping west with a possible source of the mineralisation towards the West Zone (see Figure 3). 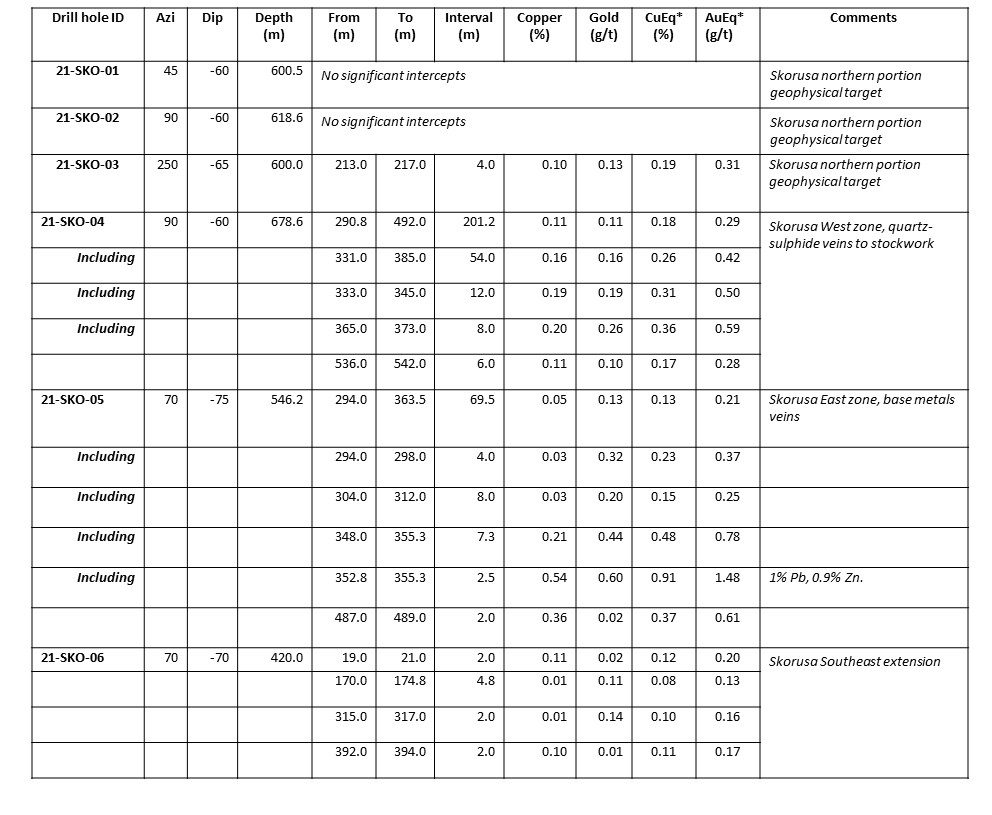 A new area of interest has been identified in the central western portion of the Skorusa license. A strong ground magnetic anomaly here with a footprint of approximately 2 km by 2 km and order of magnitude greater than any other anomalies in the area stands out in the recently completed ground magnetic geophysical survey. The cause of the anomaly is unclear and detailed geological mapping and sampling is planned for in Q3-2021.

The prospect area is outlined by copper-in-soil geochemistry in the northern portion of the Oblez license. The upper Cretaceous cover rock of volcanic agglomerate contains a variety of mineralized clasts with malachite, native copper and locally chalcocite. These clasts occur at the surface along road cuts and observed to a depth of 250 meters through a single hole drilled in 2019 to test the depth of the unit. Potential exists here for concealed epithermal and porphyry copper-gold mineralization beneath the sediments and agglomerates as part of the upper Cretaceous stratigraphy. Audio-frequency Magneto-telluric geophysical surveying has been completed at the property. Geophysical models are expected to be completed by early July and drilling to commence in late July.

This area of interest is defined by anomalous molybdenum and gold from grid soil sampling over the upper Cretaceous limestone and siltstone cover rocks in the southwest portion of the Oblez license. Anomalous geochemistry here is contiguous to the anomalous geochemistry on the Markov Kamen target directly to the west. Follow up infill soil sampling and detailed geological mapping was undertaken to understand anomalies and better define drill targets.  Compilation work based on the results from this sampling and mapping is expected to be completed in Q3-2021.

An Induced Polarization (IP) geophysics survey has been completed at the Padina license, located just east of the Bor mine complex. Interpreted models from ground magnetic and IP geophysics were used to delineate drill targeting. Drilling commenced in late June 2021. 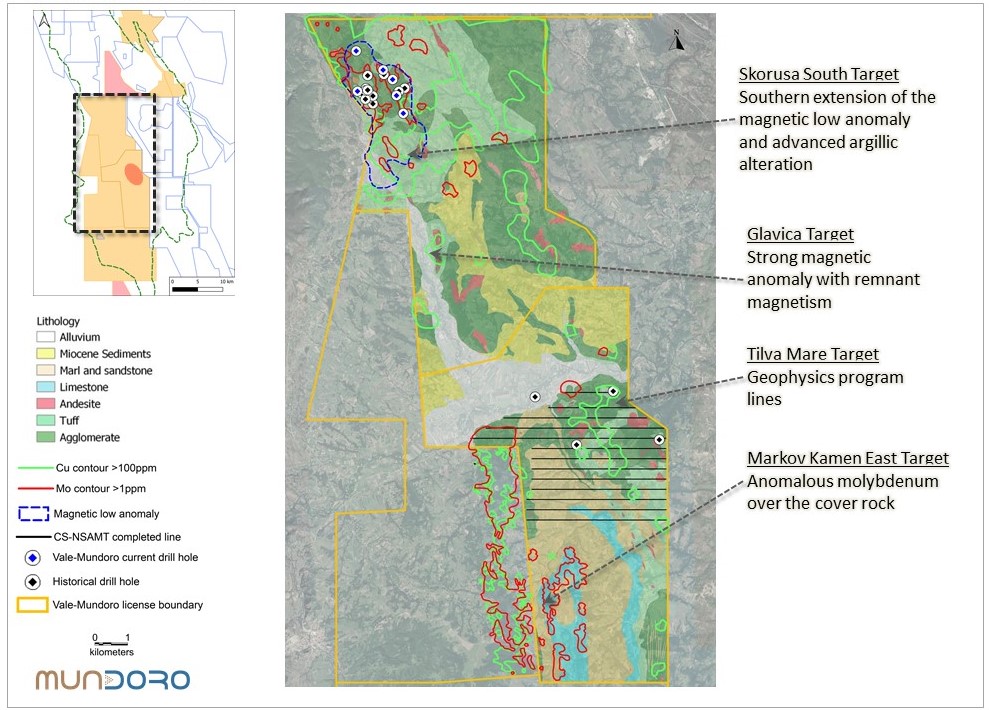 The GT7 Copper Project occupies 98 sq. km and is located in the northern portion of the Serbo-Macedonian Metallogenic Province, which is part of the Tethyan Orogenic Belt (see press release on March 30, 2021 ).The area is considered highly prospective for copper porphyry and related epithermal mineralization. The GT7 Copper Project contains exposures of diorite porphyry copper-gold type quartz stockwork mineralization and is related to precious and base metals veins hosted within surrounding sedimentary country rocks.

At about 1.5 km to the south (South Zone), historical workings and several outcrop of base-metal vein type mineralization within andesitic volcanic part of the cover rock were found. Several rock samples from prominent mineralization have been collected and sent for analysis. Assays are expected in the late of July. 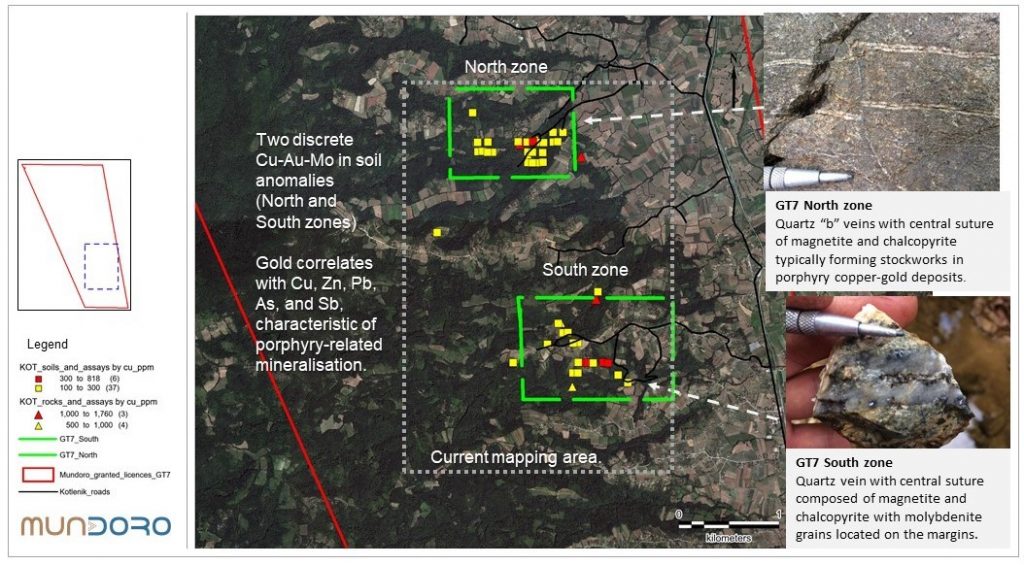 All drilling described above was triple tubed diamond drilling from surface for PQ and HQ, while for NQ was double tubed. The drill holes were generally cased from surface progressing from PQ to HQ at 260 m on average, however exact depths vary from hole to hole. Drill hole orientations were surveyed at 30 meters intervals. Drill core was oriented using the DEVICO EZ-Trac tool. The bottom of oriented core was marked by the drillers and this was used for marking the whole drill core with reference lines. Company personnel monitored the drilling, with drill core delivered daily to the Company’s core storage facility where it was logged, cut and sampled.

Core recovery was measured and recorded continuously from the top to the end of the hole for every drill hole. Each run of 3m length was marked using plastic core blocks which indicate the depth drilled. Core recovery is recorded as 96.3-100% in most intervals.

Drill core was sawn into quarters for PQ diameter and halves for HQ and NQ diameter, along the drill core orientation line using a core-cutter. Looking downhole the left half was collected in a bag and submitted for analysis, the other half is kept in-tray and stored. Samples were collected at two-meter lengths from mineralised intervals and five-meter lengths from non-mineralised intervals with brakes for major geological changes. The samples were submitted to ALS Prep Laboratory in Bor, Serbia, for sample preparation and then internally submitted to ALS Ireland for analysis. The samples were fine crushed to 2mm with 70% pass, split by rotary splitter to produce 1000 g sub-sample which was pulverized with 85% passing 75 µm. The samples were assayed using 50 grams charge for Au-fire assay with AES finish and multi-element method ME-MS61 – 48 element four acid ICP-MS. Samples returned above > 3 ppm Au, >1% Cu, >1% As and >100 ppm Ag were additionally analyzed with method OG62.

In addition to the laboratory’s internal QA/QC procedures, the Company conducted its own QA/QC with the systematic inclusion of certified reference materials every 20 samples, blank samples every 40 samples and at the beginning of sample batch, field duplicates every 25 samples.

Mundoro has engaged the services of Independent Trading Group (“ITG”) to provide market making services in accordance with TSX Venture Exchange (“TSXV”) policies. The contract with ITG is for a minimum of three months at five thousand dollars per month and will renew for additional one-month terms unless terminated by either party with thirty days’ notice.

Mundoro is a Canadian listed royalty generator company with a portfolio of projects focused on base and precious metals that generate royalties and near-term mineral revenue.  To drive value for shareholders, Mundoro has generated a portfolio of mineral projects primarily focused on copper and gold in Serbia and Bulgaria.  Value generated from our mineral properties is through near term revenues from various forms of payments from partners and long term through the generated royalties.