February 6, 2019, Vancouver, BC – Mundoro Capital Inc. (TSXV: MUN, www.mundoro.com) (“Mundoro” or the “Company“) is pleased to provide an update for the two drill programs currently ongoing on the Company’s licenses in the Timok Magmatic Complex (“Timok”) in eastern Serbia.

Borsko is one of the four licenses being sole funded by Japan Oil, Gas and Metals National Corporation (“JOGMEC”) as part of the JOGMEC-Mundoro option agreement announced
in August 2016 (Figure 1: Location Map).

The Year 3, Phase I drill program updated on October 23, 2018, which included approximately 7,200 m of diamond drilling in 7 drill holes, has been extended to approximately 9,000 meters over 9 drill holes to be completed by mid-March with the drill results by the end of March.

The current drill program aims to test: (i) Target 1: lateral extension of the hydrothermal alteration and mineralisation intersected in drill hole 17-BJ-11 (15m @ 1.04 g/t Au and 6.9 g/t Ag) further to the east-northeast  is associated by a CSAMT anomaly; (ii) Target 5: a new target identified to test IP chargeability anomaly coincident with magnetic low anomaly at favorable structural intersection located 1,500 m north-northeast of Target 1; and (iii) Additional targets: identified by both structural interpretation and geophysical programs using CSAMT and ground magnetics within the exploration license further to the south.

This drill program is being sole funded by Freeport-McMoRan Exploration Corporation (“Freeport“) as part of the earn-in agreement (“Agreement“) with Freeport, in which Mundoro has granted to Freeport an option to earn-in to Mundoro’s Savinac and Bacevica exploration licenses (the “Freeport-Mundoro JV Projects”).  Savinac and Bacevica are located within the southern portion of Timok in eastern Serbia (Figure 1: Location Map).

The Year 1, Stage 1, drill program announced October 30, 2018, which was extended from 3,550 m of diamond drilling in 5 drill holes to approximately 5,000 m in 7 drill holes, is ongoing and expected to be completed by early-February with drill results to follow within a month.

The current drill program, aims to test the following four target areas: (i) Tilva Rosh: epithermal gold target which contains 12 meters of 30 g/t gold and 171 g/t silver from rock chip sampling. Combined drill results from approximately 2,000 meters of drilling in 2014 and 2017 have interpreted the epithermal target to be proximal to a copper-gold porphyry system related to a large area of advanced argillic alteration, highlighted with a molybdenum anomaly followed by outwards zones of lead-zinc geochemical anomalies; (ii) Markov Kamen: epithermal target identified by several copper-gold-in-soil geochemical anomalies related to a broad zone of argillic and advanced argillic alteration located at the southern portion of the Savinac license. Drilling from 2015, which intersected hydrothermal breccia, massive sulphides and vuggy silica, appears to be a high sulphidation style epithermal system controlled by
NW structures; (iii) Prekostenski: porphyry copper-gold target identified from geochemical analysis of soil sampling and trench results containing 55 meters of 0.28 g/t gold and 0.21% copper located in the western portion of the Bacevica license. The exploration work identified chalcopyrite-magnetite mineralisation hosted by potassic altered andesite; and (iv) Orlovo
Brdo: broad zone of phyllic alteration with gold and copper anomalism that remains untested at the central portion of Bacevica license.

Mundoro ended Q4-2018 with approximately C$4.8 million in treasury. The remaining two Timok licenses, Sumrakovac and Osnic, are available for joint venture.  As such, Mundoro continues discussions with third parties for these two licenses Sumrakovac and Osnic as it is the Company’s continued view to establish partnerships to fund exploration activity for testing drill targets.  Although there are discussions, the Company cannot provide assurance that a transaction will be concluded as a result of these discussions. The Company will keep the market apprised of material developments.

Technical information contained in this Press Release has been reviewed and approved by Mr. G. Magaranov, P. Geo., Qualified Person as defined  by National Instrument 43-101. 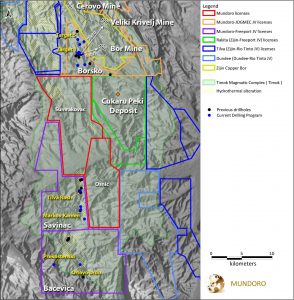