May 22, 2020 Vancouver, BC – Mundoro Capital Inc. (TSXV: MUN, www.mundoro.com) (“Mundoro” or the “Company“), is pleased to report its quarterly update for exploration and corporate activity for the three months ending March 31, 2020.  The Company has filed its quarterly Consolidated Financial Statements and Management’s Discussion and Analysis on SEDAR at www.sedar.com and posted on the Company’s website at www.mundoro.com.

Mundoro continues to have discussions with interested third parties regarding Mundoro’s projects which are available for optioning, confirming the continued interest in exploring in Timok, Serbia as well as Bulgaria.

The two licenses, Savinac and Bacevica, previously part of the Freeport earn-in from October 2018 to April 2020, have reverted 100% to Mundoro for no consideration.  Freeport informed Mundoro that it is restructuring its exploration programs and accordingly terminated their earn-in.  Mundoro has since then set up a data room, signed confidentiality agreements and engaged in due diligence with third parties.  Freeport sole funded a total of US$3.2 million (C$4.5 million) on these two licenses, therefore the current term work commitments for the licenses have been met.  No further exploration expenditures are required to maintain the licenses while Mundoro continues discussions with third parties.

For the Vale-Mundoro Projects, compiled data sets are being reviewed for targeting and exploration planning.  The parties await government approvals before exploration activity can be commenced.

To date, JOGMEC has sole funded a total of US$5.8 million (C$8.2 million) for the JOGMEC-Mundoro JV Project, and has completed the earn-in for a 51% interest in the project.  All work commitments have been met for the JOGMEC-Mundoro JV Project during this term. The joint venture is now at a proportionate funding stage, with Mundoro entitled to exercise an option to acquire a 2% interest in the joint venture from JOGMEC (taking Mundoro to 51%) for nominal consideration and maintain its role as the operator.  The JV Partners are discussing alternatives for further funding and exploration at Borsko.  A data room for the project has been opened for interested third parties which have signed a confidentiality agreement with the Company.

A data room for the Zeleznik project has been opened for interested third parties which have a confidentiality agreement signed with the Company.

The Company has several areas under application in Serbia and Bulgaria as a result of the Company’s generative programs in these two jurisdictions.

In Q1-2020, Mundoro completed the target testing drill program at the Savinac and Bacevica exploration licenses in the Timok Magmatic Complex (“Timok”) in eastern Serbia. The two licenses are located within the southern portion of Timok, one of the most prolific metallogenic domains in the Tethyan Belt with deposits such as the Cukaru-Peki, the Bor copper porphyry underground mine and the Veliki Krivelj copper-gold porphyry open-pit mine (Figure 1 and 2).

Following the results from the initial drilling program carried out between October 2018 – February 2019, as well as based on results from the completed alteration mapping and geophysical surveys, a second drilling campaign was initiated in October 2019. Total drilling was originally planned for a 3,500-meter program and increased to a total of 8,735 meters.  The three-drill rig program tested four of the five target areas between October 2019 and February 2020 (see Figure 3 and 4).  The fifth target to be tested, Markov Kamen, was scheduled to commence in March 2020 but the program was suspended due to restrictions related to the COVID-19 pandemic.

Mundoro completed a 450-meter drill program in March 2020 at the Zeleznik group of licenses which are 100% owned by the Company and available for optioning.  Zeleznik is directly north of the Majdanpek mine at the north end of the Timok district (see Figure 1).  The drill program was designed to test the southern extension of the East Zone by 200 m to the south with two inclined drill holes.  After the state of emergency related to COVID-19 is lifted in Serbia, the Company will send samples to the assay lab.  In the meantime, the exploration team is completing detailed logging, core photo collection along with XRF analysis and alteration analysis.  The Company expects to be able to report assay results in Q2-2020.

The drilling technique was triple tubed diamond drilling from surface for PQ and HQ, while for NQ was double tubed. The drill holes were generally cased from surface progressing from PQ to HQ at 260 m on average, however exact depths vary from hole to hole. Drill hole orientations were surveyed at 30 meters intervals. Drill core was oriented using the Reflex EZ-Trac tool, the bottom of oriented core was marked by the drillers and this was used for marking the whole drill core with reference lines. Company personnel monitored the drilling, with drill core delivered daily to the Company’s core storage facility where it was logged, cut and sampled.

The drill core was sawn into quarter for PQ diameter and into two for HQ and NQ diameter, along drill core orientation line using a core-cutter and left half looking downhole was collected in bag and submitted for analysis, the other half is kept in tray and stored. Samples were collected at three-meter lengths from mineralised intervals and three to five-meter lengths from non-mineralised intervals with brakes for major geological changes. The samples were submitted to ALS Prep Laboratory in Bor, Serbia, for sample preparation and then internally submitted to ALS Romania and ALS Ireland for analysis. The samples were fine crushed to 2mm with 70% pass, split by rotary splitter to produce 1000 g sub-sample which was pulverized with 85% passing 75 um using. The samples were assayed using 50 grams charge for Au-fire assay with AES finish and multi-element method ME-MS61 – 48 element four acid ICP-MS. Samples returned above > 3 ppm Au, >1% Cu, >1% As and >100 ppm Ag were additionally analyzed with method OG62.

Mundoro is a Canadian listed (TSX-V:MUN) precious and base metal company focused on building value for its shareholders through directly investing in mineral projects that have the ability to generate future returns for shareholders.  Mundoro has generated an attractive mineral project pipeline in Serbia and Bulgaria, as well as an investment in a producing gold mine in Bulgaria, in order to drive long-term growth and achieve shareholder return.  Potential future returns for our shareholders from our mineral properties can be in various forms such as discovery of mineral resources, royalties, advance royalty payments from partners, an interest in production, dividend payments or sale of our interest in the mineral property. 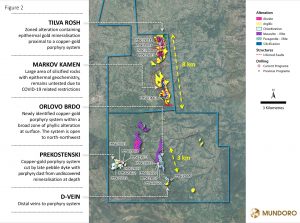 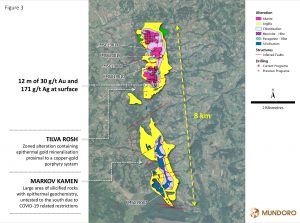 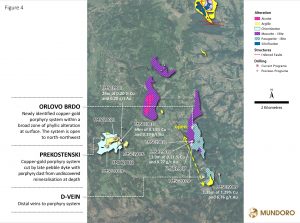