March 25, 2019, Vancouver, BC – Mundoro Capital Inc. (TSXV: MUN, www.mundoro.com) (“Mundoro” or the “Company“) is pleased to announce completion of the third year exploration program with Japan Oil, Gas and Metals National Corporation (“JOGMEC”), on the Borsko Jezero license (“Borsko”) located within the Timok Magmatic Complex (“Timok”) in eastern Serbia.  This exploration program is the third year of the Phase I earn-in with JOGMEC, which included primarily: (i) 57.6 line kilometers of Induced Polarization (“IP”) geophysics, (ii) a gravity survey over 6 sqkm and (iii) target testing drilling of 9,090 meters over 9 drill holes in Borsko.

Teo Dechev, CEO & President of Mundoro commented, “Mundoro’s exploration portfolio of targets, projects and partners is designed such that the success of the company is driven by the proven earn-in partner funding model to test targets and advance exploration of projects.  The Company continues to have discussions with interested third parties seeking options on our available projects, confirming the growing interest in exploring the Tethyan Belt in Timok, Serbia as well as Bulgaria.”

Teo Dechev, CEO & President of Mundoro commented, “Mundoro’s management and exploration team continue to see compelling reasons for exploring the Borsko license, located in the center of Timok.  Under the terms of the earn-in agreement, JOGMEC was required to spend US$4 million in Phase I while to date, JOGMEC has spent approximately US$5.09 million. JOGMEC will render a decision on whether to proceed to Phase II of the earn-in agreement in May 2019. Thereafter it will be determined final ownership percentage and how the Borsko exploration program will be advanced. Of main interest in the Borsko license is Target 1 which requires further drilling in order to test for: (i) continued lateral extent of the lithocap for high sulphidation style mineralization in the upper portion of the lithocap and (ii) a possible porphyry system responsible for the alteration and mineralization identified.”

Highlights of the Borsko Exploration Program

Target 1 was discovered as a result of the 2017 drilling program, which was focused on testing targets defined by structural and geophysical interpretations.  The first hole in this program, BJ-06, discovered advanced argillic alteration system hosted in andesite beneath 550 m of volcanic cover at Target 1.  Target 1 is identified as a undercover lithocap which can be indicative of, and has the potential to host: (i) high sulphidation copper-gold mineralization and (ii) porphyry copper-gold mineralization.  The lithocap has the following features:

The drill core observations, aided by spectral alteration mapping, were able to identify vertically and laterally zoned alteration to be used as a vector towards mineralised “hot spots” of the hydrothermal system (Figure 2). Based on the vertical and lateral zonation of the lithocap, the system remains open in the following directions:

Other Targets Tested in the JOGMEC Exploration Program

Approximately 2,000 meters to the south of Target 1, the South Target was tested which identified a heavily faulted zone of pyrite-bearing chlorite-smectite-kaolinite alteration for an interval of 184 m in drill hole 18-BJ-19, indicating a possible periphery of another Borsko-type lithocap.

Located approximately 2,000 m to the north-northeast of Target 1, Target 5 was tested with three drill holes 18-BJ-14, 18-BJ-15 and 18-BJ-17 to test the west-northwest fault that runs through the area of Target 5 and appears to also be cutting through the vicinity of the Bor mine 4 km to the east.  Trace of chalcocite and remnant of covellite and chalcopyrite mineralisation, as well as disseminated native copper were observed within the hornblende-feldspar andesite.

The drilling technique was triple tubed diamond drilling from surface for PQ and HQ, while for NQ was double tubed. The drill holes were generally cased from surface progressing from PQ to HQ at 380m on average, however exact depths vary from hole to hole. Drill hole orientations were surveyed at approximately 30 meters intervals. Drill core was oriented using the Reflex EZ-Trac and Devico Pee Wee tools, the bottom of the core was marked by the drillers and this was used for marking the whole drill core with reference lines. Company personnel monitored the drilling, with drill core delivered daily to the Company’s core storage facility where it was logged, cut and sampled.

Core recovery was measured and recorded continuously from the top to the end of the hole for every drill hole. Each run of 3m length was marked by plastic core block which provided the depth drilled. Core recovery is recorded as 99.4-100% in most intervals. 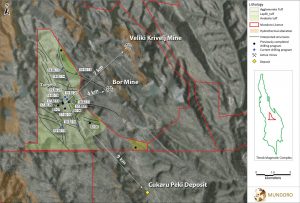 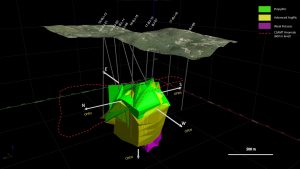