February 26, 2020, Vancouver, BC – Mundoro Capital Inc. (TSXV: MUN, www.mundoro.com) (“Mundoro” or the “Company“) is pleased to report on exploration activity for the Company’s partner funded exploration programs that are ongoing in Serbia and Bulgaria. The Company’s unaudited consolidated financial statements and Management’s Discussion and Analysis are expected to be filed by the end of April 2020 on SEDAR at www.sedar.com and posted on the Company’s website at www.mundoro.com.

Mundoro’s exploration portfolio of targets, projects and partners is designed such that the success of the company is driven by the proven earn-in funding model.

At the Freeport-Mundoro Projects (see Figure 1 – Location Map of Projects in Serbia), drilling is ongoing and has been increased from an initial 3,500 meter program to 8,541 meters with the possibility it may increase further such that drilling is not expected to be completed until the end of Q1-2020 with results expected in Q2-2020 (see Figure 2 – Freeport-Mundoro Project – Drill Target Locations).  A summary of the targets and exploration at each area is provided below:

Borsko is a 35 sq.km license area sole funded by Japan Oil, Gas and Metals National Corporation (“JOGMEC”) as part of the earn-in agreement entered into in 2016. Borsko is located near the central portion of the Timok Magmatic Complex (see Figure 1 – Location Map of Projects in Serbia). Borsko is directly adjacent and to the west of the producing Bor copper porphyry mine which is directly west of the Veliki Krivelj copper-gold porphyry mine. For further description of the Borkso geology see Mundoro’s press release dated December 18, 2017 at www.mundoro.com.

In March 2019 Mundoro entered into a Generative Program Agreement (the “Generative Alliance”) in the Republic of Bulgaria with JOGMEC to be sole-funded by JOGMEC. The purpose of the Generative Alliance is to establish a program between Mundoro and JOGMEC, whereby Mundoro will carry out mineral exploration activities in Bulgaria under the direction of a joint Technical Committee with the view to identifying areas of interests that merit additional exploration and/or development work.

Upon JOGMEC determining that one or more properties merit additional exploration and/or development work, JOGMEC has the right to establish a joint venture on that property with Mundoro.

Status: The generative program has been completed and JOGMEC has selected designated projects to proceed to the next stage of the agreement.

For the Vale-Mundoro Projects, the Technical Committee is reviewing work programs in order to be in a position for exploration in the second half of 2020.

The drilling technique was triple tubed diamond drilling from surface for PQ and HQ, while for NQ was double tubed. The drill holes were generally cased from surface progressing from PQ to HQ at 380m on average, however exact depths vary from hole to hole. Drill hole orientations were surveyed at approximately 30 meters intervals. Drill core was oriented using the Reflex EZ-Trac and Devico Pee Wee tools, the bottom of the core was marked by the drillers and this was used for marking the whole drill core with reference lines. Company personnel monitored the drilling, with drill core delivered daily to the Company’s core storage facility where it was logged, cut and sampled.  Core recovery was measured and recorded continuously from the top to the end of the hole for every drill hole. Each run of 3m length was marked by plastic core block which provided the depth drilled. Core recovery is recorded as 99.4-100% in most intervals.

Mundoro is a Canadian mineral exploration and development public company focused on building value for its shareholders through directly investing in mineral projects that have the ability to generate future returns for shareholders.  The Company holds a portfolio of projects in Serbia and Bulgaria as well as an investment in a producing gold mine in Bulgaria.  There are eight licenses in Serbia, four of which are optioned to JOGMEC, two licenses are optioned to Freeport-McMoRan Exploration Corporation and two licenses are available for joint venture.  In Bulgaria, Mundoro has formed a Generative Alliance with JOGMEC. Mundoro’s common shares trade on the TSX Venture Exchange under the symbol “MUN”. 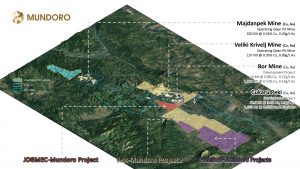 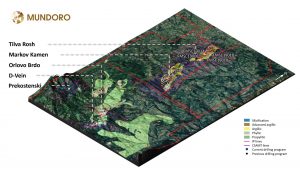 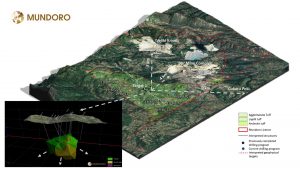 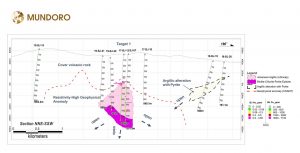