Teo Dechev, CEO & President of Mundoro commented, “Mundoro has benefited from establishing earn-in relationships to fund our exploration programs.  Mundoro is appointed operator for Phase I and has completed, five months after closing the transaction, the first target testing drill program funded by Freeport. The 2019 exploration program will continue with follow-up geophysical surveys and alteration mapping. The geophysical surveys have been scheduled for Q2-Q3 2019 in order to be used for planning further drill programs.  As a result of having optionee funded exploration programs, Mundoro conserves its cash.  At the end of Q1-2019, the treasury of the Company was approximately C$3.2 million.  Mundoro continues to have discussions with interested third parties seeking options on our available projects, confirming the growing interest in exploring the Tethyan Belt in Timok, Serbia as well as Bulgaria.”

A total of 4,778 m of diamond drilling has been completed in seven drill holes. Planning has commenced for geophysics surveys and alteration mapping at both licenses as part of the 2019 exploration program.  The aim of the initial target testing drill program was to test four target areas located along the 16-km elongated zone of extensive hydrothermal alteration defined by mapping and Cu-Mo-Au-Ag-Pb-Zn geochemical anomalies (see Figure 2: Map of Targets, Hydrothermal Alteration, Drill Hole Locations and Planned Geophysics).

The drilling technique was triple tubed diamond drilling from surface for PQ and HQ, while for NQ was double tubed. The drill holes were generally cased from surface progressing from PQ to HQ at 260m on average, however exact depths vary from hole to hole. Drill hole orientations were surveyed at approximately 30 meters intervals. Drill core was oriented using the Reflex EZ-Trac and Devico Pee Wee tools, the bottom of the core was marked by the drillers and this was used for marking the whole drill core with reference lines. Company personnel monitored the drilling, with drill core delivered daily to the Company’s core storage facility where it was logged, cut and sampled.

The drill core was sawn into quarter for PQ diameter and into two for HQ and NQ diameter, along drill core orientation line using a core-cutter and left half looking downhole was collected in bag and submitted for analysis, the other half is kept in tray and stored. Samples were collected at two-meter lengths from mineralised intervals and three to five-meter lengths from non-mineralised intervals with brakes for major geological changes. The samples were submitted to ALS Prep Laboratory in Bor, Serbia, for sample preparation and then internally submitted to ALS Romania and ALS Ireland for analysis. The samples were fine crushed to 2mm with 70% pass, split by rotary splitter to produce 1000 g sub-sample which was pulverized with 85% passing 75 um using. The samples were assayed using 50 grams charge for Au-fire assay with AES finish and multi-element method ME-MS61 – 48 element four acid ICP-MS. Samples returned above > 3 ppm Au, >1% Cu, >1% As and >100 ppm Ag were additionally analyzed with method OG62. 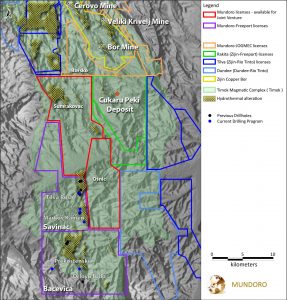 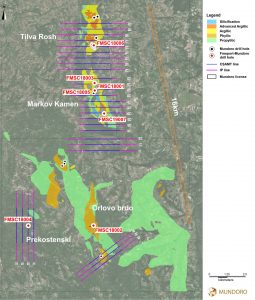